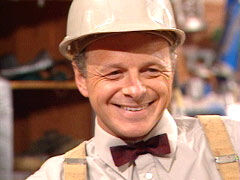 Winston Rothschild, III (Jeff Lumby) is the sole owner and employee of Rothschild's Sewage and Septic Sucking Services. An enthusiastic entrepreneur with an unshakeable get-up-and-go attitude and a poor sense of smell, Winston is constantly looking for ways to promote his services. He is never seen without his trademark hip waders, white button-down shirt, bowtie and hard hat, and whenever given the chance, he will talk at length about his business ("which, as you know, is other people's business.").

Winston spends much of his time creating clever advertisements for his company. In earlier episodes, he usually delivers a short poem to promote his services ("If roses are purple[needs verification] and violets are black, sounds like your septics are way out of whack!"). However, later in the series, he begins to parody commercials and gimmicks produced by real Canadian companies, including one segment in which he offers the customer a free toy septic truck and an action figure in his likeness. Winston will stop at nothing to extoll the virtues of his trade, usually drawing blank stares from the people around him.

Winston is also a big fan of self-help guru Anthony Anthony. Winston staunchly believes everything Anthony says, and helps to promote his work, even though most everyone else knows it's just a scam.

Unfortunately, Winston is not as lucky in love as he is in his business. Despite his best efforts, he is consistently unable to get much more than a single date with any woman, even when he arranges a wedding in order to attract a bride. His lack of success in this arena, combined with his generally upbeat attitude, have on more than one occasion raised people's suspicions that he might be gay, though this is never proven.

Community content is available under CC-BY-SA unless otherwise noted.
Advertisement